China’s recent blitz of education, technology, property and gaming regulations has triggered a cascade of knock-on effects in global markets. Chinese assets in targeted sectors have experienced volatility since the government announced new regulations. Now, tighter policy restrictions have put highly levered Chinese property developer Evergrande in a liquidity crunch. Contagion fears have spilled into global markets. For many investors in the emerging market universe, China’s policy moves have raised concerns. Some might be wondering—what’s China’s endgame? Have the government’s shifting policies made China uninvestible?

I don’t think so. To make sense of China policy, I look at the big picture. At the highest level, the Chinese government wants to align the private sector behind the Communist Party’s political, social, and economic objectives, which it believes are crucial for supporting China’s growth over the next 10 years. I believe the government’s recent regulatory actions are consistent with three broad factors driving China policy:

Below, I explore how these factors apply to two key questions about China’s regulatory blitz. 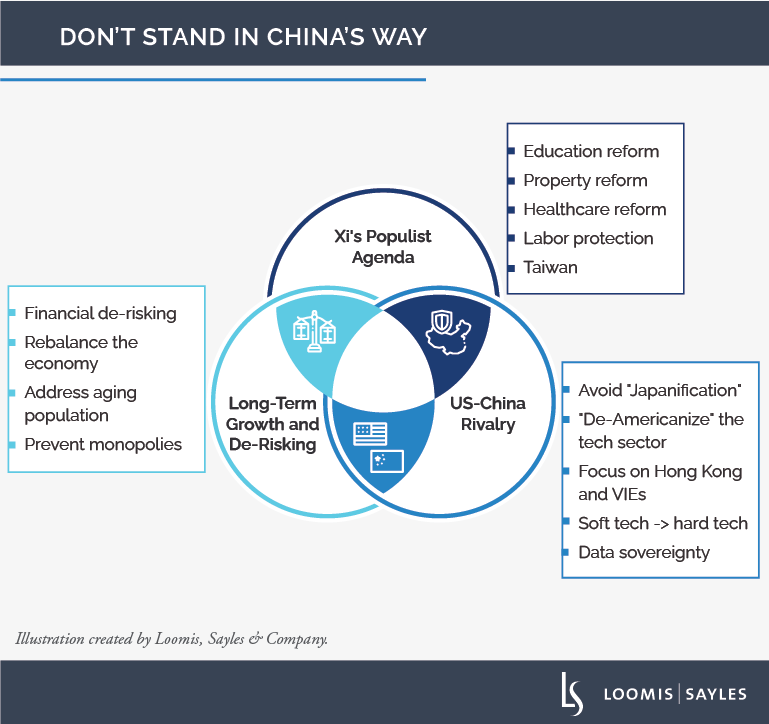 Why is Beijing acting so aggressively now?

First is Xi’s desire to burnish his socialist credentials ahead of the Communist Party’s 2022 National Congress. China removed the presidency’s constitutional two-term limit in 2018, paving the way for Xi to rule beyond 2023. In my view, Xi is trying to bolster the case for his extended rule with a populist “common prosperity” agenda aimed at reducing inequality and poverty.

The second driver is the ongoing US-China rivalry. As tensions between the two countries intensify, Beijing believes it is dealing with a new paradigm of rising global uncertainty and an increasingly hostile external environment. The recent policy actions appear in line with China’s Dual Circulation Strategy (DCS), which aims to stoke domestic economic demand and reduce vulnerability to external shocks in areas like food, technology and energy. Ultimately, China’s endgame is to achieve a self-sufficient economy with global standing equal to the US.

Third is China’s desire to deleverage after recent strong growth. The economic transformation outlined in the DCS requires major structural reform and financial risk mitigation. The government took steps to deleverage in recent years (recall the crackdowns on shadow banking and the property sector), but suspended those plans when the US-China trade war began. Then the COVID-19 pandemic hit. After achieving strong growth in the second half of 2020, Beijing has resumed its deleveraging campaign. I believe recent actions aimed at property developers should help the government roll out its property holding tax and other fiscal reforms and help support sustainable long-term growth.

Is this an assault on the private sector?

Not in my opinion. China’s most recent Five-Year Plan, approved in March 2021, included a wide range of programs that align with China’s long-term objective of moving toward more market-oriented reforms while maintaining market, economic and social stability. The direction of policy appears the same. What has changed, in my view, is the pace of policy action as China plays regulatory catch-up.

Remember, China is not the only country using policy action as a tool for social objectives. In the US, the Federal Reserve has become more focused on inclusive employment growth, while EU leaders have been encouraging investment that incorporates environmental and social considerations.

Amid the headline risk, a path to a more balanced economy

I expect more policy action ahead of the Communist Party Congress in late 2022. But that doesn’t mean investors should shy away from China. For research-oriented investors with an understanding of the policy backdrop, I believe headline-related volatility could yield potential opportunity.

So what about Evergrande? Could the troubled company put China at risk for a systemic failure? In an upcoming post, I’ll explore how policymakers might respond to the situation and what the long-term implications may be.

The information in this article is provided for general information purposes only and does not take into account the investment objectives, financial situation or needs of any person. Investors Mutual Limited (AFSL 229988) is the issuer and Responsible Entity of the Loomis Sayles Global Equity Fund (‘Fund’). Loomis Sayles & Company, L.P. is the Investment Manager. This information should not be relied upon in determining whether to invest in the Fund and is not a recommendation to buy, sell or hold any financial product, security or other instrument. In deciding whether to acquire or continue to hold an investment in the Fund, an investor should consider the Fund’s Product Disclosure Statement, available on the website www.loomissayles.com.au or by contacting us on 1300 157 862. Past performance is not a reliable indicator of future performance. Investments in the Fund are not a deposit with, or other liability of, Investors Mutual Limited and are subject to investment risk, including possible delays in repayment and loss of income and principal invested. Investors Mutual Limited does not guarantee the performance of the Fund or any particular rate of return.

Supply chain issues, slower growth in China and the lingering impact of[…]

The pandemic triggered economic ripples that have weighed on growth while[…]

Stay up to date
with Loomis Sayles

Please keep me up to date with the latest news and insights from Loomis Sayles.

Portfolio Managers Eileen Riley and Lee Rosenbaum recently joined Investment Specialist Peter McPhee to provide some insights into how the...

Supply chain issues, slower growth in China and the lingering impact of COVID-19 have created a bumpier path for global growth than we had...

The pandemic triggered economic ripples that have weighed on growth while driving prices higher. In October, the IMF said it expects global...

Why Go Active in Global Equities?

Investing offshore has historically provided significant benefits for Australian investors, as does investing with an active approach,...

4 compelling stocks for a post-pandemic world

Times like these, as tough as they are, create opportunity. Co-portfolio manager, Eileen Riley, recently sat down with Livewire’s Patrick...

The Perfect Storm Behind the Gas Price Surge

The worldwide spike in natural gas, coal and power prices has put Europe and China at risk of industrial shutdowns. While the situation...

We believe the global expansion is broadly underway, though the COVID-19 delta variant has taken some steam out of the global growth...

China’s recent blitz of education, technology, property and gaming regulations has triggered a cascade of knock-on effects in global...

Our Best Ideas in Global Equities (now trading on the ASX)