The financial troubles of China Evergrande Group, China’s second-largest property developer, have put market participants on edge. Recently tightened financial restrictions have propelled the highly levered company into a liquidity crisis and it’s at risk of default. Given the company’s size, many investors are worried that its problems could lead to system-wide financial pain in China, with potential ripple effects across the global economy.

In my view, the situation is testing China’s balancing act between financial de-risking and preventing systemic financial risk. Remember, the Chinese government’s policy goal is to reduce leverage and mitigate risks to the financial system. On one hand, allowing Evergrande to suffer the consequences of its risk-taking behavior would send an important message to the market about curbing excessive debt and “moral hazards.” On the other hand, the size and interconnected nature of Evergrande’s debt means that a default could have potential knock-on effects throughout the economy. With the 20th Communist Party Congress just over a year away, I believe the government will move decisively to prevent a crisis and ensure growth remains on track in 2022.

Below, I share my thoughts on how China might handle this balancing act and what could go wrong. 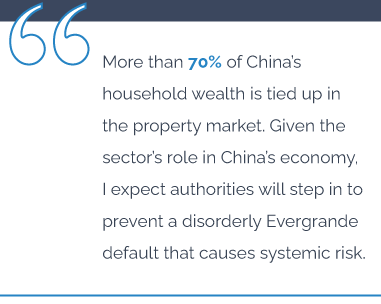 I think the most likely outcome for Evergrande is a controlled debt restructuring with some government intervention. In this scenario, authorities would establish a creditor committee to help extend the maturity of the company’s debt obligations, reduce lending rates and provide support to stave off default. They would also call in some state-owned enterprises (SOEs) to complete Evergrande’s construction projects to maintain homebuyer confidence. In my view, this approach would allow the government to strike a balance between instilling market discipline and containing systemic risk.

What could go wrong?

Is China headed for an economic slowdown?

I believe so. With mass media coverage of Evergrande and an outlook for stagnant prices, I think new housing sales will slow. Sluggish housing sales could then erode prices at land sales auctions and undercut a major source of revenue for local authorities. Barring the worst-case scenario of a disorderly Evergrande default, I believe we are likely to see weaker demand growth in China for at least the next two quarters. I estimate fourth-quarter GDP at just above 4.5%. Under these circumstances, I believe the government could implement additional fiscal and monetary stimulus as soon as November or December.

What’s priced into the markets?

The markets generally appear to be pricing in an orderly unwind of Evergrande’s debt obligations. As of this writing, downward pricing pressure has been largely confined to China’s property sector. I do not think the markets have priced in a growth slowdown in China or how that might affect the global economy.

Time is of the essence

With each day that passes, I believe the knock-on risks associated with Evergrande grow. Investors have begun re-pricing credit risks among other Chinese property developers, increasing the already-high refinancing pressure on leveraged firms. In my view, Chinese authorities should act soon with carefully crafted assistance to contain the situation.

The information in this article is provided for general information purposes only and does not take into account the investment objectives, financial situation or needs of any person. Investors Mutual Limited (AFSL 229988) is the issuer and Responsible Entity of the Loomis Sayles Global Equity Fund (‘Fund’). Loomis Sayles & Company, L.P. is the Investment Manager. This information should not be relied upon in determining whether to invest in the Fund and is not a recommendation to buy, sell or hold any financial product, security or other instrument. In deciding whether to acquire or continue to hold an investment in the Fund, an investor should consider the Fund’s Product Disclosure Statement, available on the website www.loomissayles.com.au or by contacting us on 1300 157 862. Past performance is not a reliable indicator of future performance. Investments in the Fund are not a deposit with, or other liability of, Investors Mutual Limited and are subject to investment risk, including possible delays in repayment and loss of income and principal invested. Investors Mutual Limited does not guarantee the performance of the Fund or any particular rate of return.

Supply chain issues, slower growth in China and the lingering impact of[…]

The pandemic triggered economic ripples that have weighed on growth while[…]

Stay up to date
with Loomis Sayles

Please keep me up to date with the latest news and insights from Loomis Sayles.

Portfolio Managers Eileen Riley and Lee Rosenbaum recently joined Investment Specialist Peter McPhee to provide some insights into how the...

Supply chain issues, slower growth in China and the lingering impact of COVID-19 have created a bumpier path for global growth than we had...

The pandemic triggered economic ripples that have weighed on growth while driving prices higher. In October, the IMF said it expects global...

Why Go Active in Global Equities?

Investing offshore has historically provided significant benefits for Australian investors, as does investing with an active approach,...

4 compelling stocks for a post-pandemic world

Times like these, as tough as they are, create opportunity. Co-portfolio manager, Eileen Riley, recently sat down with Livewire’s Patrick...

The Perfect Storm Behind the Gas Price Surge

The worldwide spike in natural gas, coal and power prices has put Europe and China at risk of industrial shutdowns. While the situation...

We believe the global expansion is broadly underway, though the COVID-19 delta variant has taken some steam out of the global growth...

China’s recent blitz of education, technology, property and gaming regulations has triggered a cascade of knock-on effects in global...

Our Best Ideas in Global Equities (now trading on the ASX)